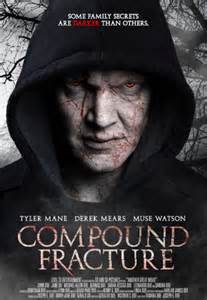 Its rare that I preorder a film the day you are able to, this film I did. I am a pretty big fan of Tyler Mane, I even watched him as a professional wrestler under the name Big Sky. I even traveled down to the Sacramento Twisted Terror Convention to meet him… a few other awesome people as well but he actually sealed the deal for me. So we have Tyler Mane in a movie where the writer is not Rom Zombie (Mane is actually one of the writers as well) but we have Derek Mears playing opposite him. If you are a horror fan having those two in it should be enough of a reason to be excited about this movie.

Micheal (Mane) is the son of an abusive Father (the amazing Muse Watson from “I Know What Your Did Last Summer”) who had left home as a teenager but is now in a situation in which he has to return home. His sister died at the hands of her husban William who also died by getting shot in the head. The whole story is really tragic and well done through flashbacks, the sad thing is that there is one survivor from that little family, Brandon, the only child. He has been living with Michael and his fiance Juliette and kid doesn’t get along with either of them.

Things get weirder when they arrive at Gary’s place. The entire place seems to be wired for video and audio in some cases. The Old man is apparently loosing it, putting arcane symbols all over the house and his current wife has had enough. It’s creepy enough with everything that is going on (I have a thing about being spied on) but then the ghost of William decides to go after the family.

First off I love this cast, it’s not one of the AAA films from Hollywood but it has a cast that should be utilized more. Tyler Mane is not only a fantastic monster as shown by his work in Halloween but a fantastic actor over all. Mears is a beast and really came off in this movie like he really deserved to be feared like he was. One of my favorite scenes involves the two going at it and it is just awesome looking. Seriously the rest of the cast was just as good as these two. I really haven’t seen Muse in too many films but this movie sold me on his skill at portraying a deep character. Tow people I had never really seen before was Renae Geerlings (the other writer and female lead) and Alex Saxon. I really loved the cast of this movie and wish that they continue to do work together in some capacity. Because the actors were so good they were able to do something with this movie that is rare for horror films. Most movies in this genre are plot driven films and most of the characters are only skin deep. This movie is actually character driven meaning that they felt like real people and their interaction were able to movie the story along.

Lastly I want to mention the practical effects because they are rarely on this level. They managed to do things ina very realistic way and I was very impressed with how good the bruising looked. I know that isn’t the biggest deal for most people, in fact I’m sure a lot of people over looked it but it was so well done that me and the people who watched it with me were raving about it after.

I’m sorry, if you are a horror fan you have to watch the movie. I’m not much of a fan of haunting style films but this one is easily in my top ten films. Not of this year or this decade but period. The best news I have seen lately is that a good deal of the cast will be working together in Mane Entertainment’s next movie. Watch this movie…. like now…. ready… go.